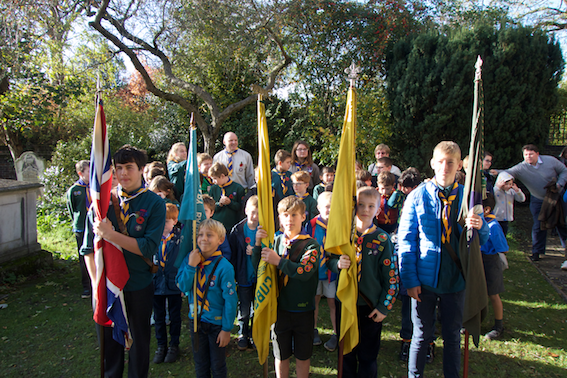 All sections of the Scout Group, Beavers, Cubs and Scouts followed a full programme of activities throughout the year. All our meetings were held in the Scout Hut on Queen Elizabeth Walk. A mixture of games, working towards badges and awards and learning traditional Scouting skills make up the contents of our meetings. As often as we can we like to be outdoors, on the playing fields opposite the Scout Hut, Barnes Common, along by the river and other local areas.

During the year we had several camps. The Cubs and Scouts had a joint camp at Walton Firs, near Cobham at the beginning of June and they also attended Borough Camp with other Scout Groups from Richmond upon Thames district in July, again at Walton Firs. The Beavers had a District Funday followed by a sleepover also at Walton Firs in September.

The Beavers went to Brooklands Museum for a District Air Activities Badge Day in May and attended the District New Year Party in January.  Some of the Cubs went with other Cubs from the District to a Fun Day at the National Scout H.Q. at Gilwell in Essex in June. A team of Cubs took part in the Ian Goddard Challenge, a district Cub trail competition, this year held at Richmond Riverside in September. The Cubs enjoyed an evening air rifle shooting at 1st Whittons Scout Hut also in September. In March a team of Cubs entered and won the District Cub Quiz. Both Beaver Colonies and Blue Pack Cubs enjoyed a visit to St. Marys Church to hear the Rvd. James talk about his work and to complete a worksheet about the Church building.

Two of our ex-Scouts, now Young Leaders, attended the World Scout Jamboree in West Virginia in July and August and another Scout hopes to go to the Euro Jamboree in Poland later this year.

Two of our Scouts were nominated for and won the Jack Petchey Award for their commitment to Scouting. The prize money plus funds from the Group paid for two trips chosen by the winners, a night on H.M.S. Belfast and a tour of Twickenham Stadium and the Rugby Museum.

At Barnes Fair the leaders and parents served burgers and other refreshments at our kitchen tents on Barnes Green by Station Road. The Cubs again ran a very popular Coconut Shy.

Our annual Jumble Sale was once again held in February at Kitson Hall. It is a lot of work but provides important funds for our activities. We send our thanks to all the people from the Barnes community who help us with this.

At Christmas the Group provided and decorated the Christmas tree in the Church.

At present we have two Beaver Colonies, two Cub Packs and one Scout Troop.

Sadly we have had no meetings since the Cub Quiz on the 14th March due to the Covid-19 outbreak. We keep in touch by e-mail, suggesting activities and badge work the children can do at home until things get back to normal.