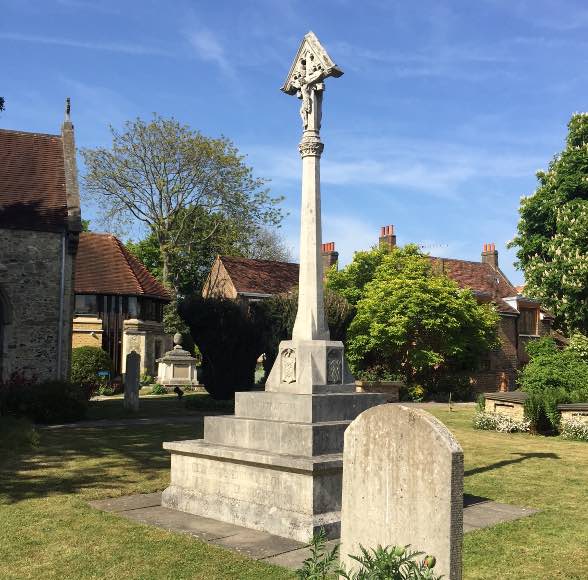 Historic England has given Grade II listing to the war memorial in the St Mary’s Barnes churchyard.  This is part of the War Memorials Listing Project to mark the centenary of the First World War, commemorating the role of communities across the country in the conflict.  The reasons given for the designation were that, as well as being of historic interest, this is an attractive and imposing gabled cross war memorial and has “group value” with the existing Grade II* listing of St Mary’s Church.

The war memorial has a tall octagonal stone shaft surmounted by a decorated gable with a sculpture of Christ.  This rests on a plinth, each face of which bears a decorated shield hanging from a flower, representing the instruments of the Passion.  These depict the Crown of Thorns, with crossing Holy Sponge and Holy Lance; the hammer and tongs used to nail Christ to the cross, with dice representing the casting of the lots for Jesus’s robes; the Cross; and the pillar and whips, representing the flagellation of Christ.  This rests on a two-step plinth, the front faces of which bear the inscriptions “1914 1919 and 1939 1945” and “Our Glorious Dead”.

The memorial was unveiled on 19 June 1921 in a ceremony attended by Field Marshall Sir John French.  As part of the church and churchyard, it is well maintained by funds generated by the activities of The Friends of St Mary’s Barnes and is the centrepiece for the annual Remembrance Day service which this year will be held on Sunday 12 November 2017.